Use your digital camera to snap a pic of nature in your everyday life. Post and tag us on our new Instagram page, rpiofficial, and use #RPIeveryday. Post by Oct. 12 for your chance to win a swag pack!

6 questions with Steven Sasson ’72, inventor of the digital camera

In conferring its Innovation Award on Sasson in 2009, The Economist called the digital camera a “seismic disruption” that rendered the existing technology virtually obsolete. The entire digital imaging industry traces directly back to Sasson’s original innovation. Sasson was awarded the 2009 National Medal of Technology and Innovation. Sasson is a member of the Rensselaer Alumni Hall of Fame.

Q: What inspired you to invent the digital camera?

Soon after arriving at Eastman Kodak I received the opportunity to investigate a new charge coupled device (CCD) that was a light sensitive area array. I thought it would be an interesting idea to use this type of electronic imaging chip to build an all-electronic still imaging camera device. That is, a camera that didn’t use photographic film but would instead record an image by digitizing the output of this CCD imaging chip and storing that data. I was excited by the idea of building an “all-electronic still image” camera that would require no moving parts at all. Also, since the image would be stored in a digital electronic format, it would be possible to view the image electronically, on a conventional television set. This would mean that no photographic prints would be required to view the image. This was quite a departure from how photography was practiced up to this point but it seemed to me to have several advantages if it could be accomplished with the same level of performance and reliability as film-based photography. My first 1975 prototype camera and playback imaging system crudely demonstrated most of these features but was a far cry from coming close to the performance of consumer film-based cameras of the time. It took another 20 years for this approach to consumer photography to begin to enter the marketplace and an additional 10 years or so to displace film-based cameras as the consumer’s choice for capturing their images.

Q: What was the first picture you took?

It took almost a year of work in the laboratory to construct both the camera and what we called the playback system (the device that enabled us to view the image captured by the camera). During that time we were not able to “see “ anything captured by the camera itself. The only measure of our progress was accomplished by observing oscilloscope waveforms and voltage measurements on our lab voltage meters. Both the camera prototype and the playback device had to work in order to actually see any images. That point was reached in December 1975. Our first real image was of a young lab technician who was working down the hall from our lab. She agreed to have her image taken by me with my very odd-looking prototype camera. The image was captured in 50 milleseconds but it took 23 seconds to record the digitally stored image on a cassette tape drive that was part of the camera. To display the image, the tape was removed from the camera and placed in the playback system which then displayed the black-and-white image on a TV set. This head and shoulders shot of the lab technician was the first digital snapshot by our system.

Q: How does a person (or company) undertake “seismic disruption”?

I’m not sure there is a single or simple answer for this question. From my perspective, it took approximately 30 years for consumer still photography to navigate the change from using photographic film to electronic (digital) imaging. That is most of a working lifetime (at least mine). During that time I observed large organizational disruptions and realignment in attempts to maintain the existing business and adapt it to an uncertain future. Our company invested heavily in R &D for the new digital imaging technology but it took many years for the performance to begin to equal that of the existing film technology (which was also improving during this time). The transition required not only new technology, it also required new business models and market relationships. In order to navigate this type of change, individuals and organizations have to reinvent themselves, which means critically examining the future value of the skills or practices that made you or your organization successful up to this point. If the future value of these performance metrics are in doubt, you have to challenge yourself to begin to move in the new desired direction. It is uncomfortable for individuals to do this and well-established organizations are not built to change easily. If history is any guide, the only trend that one can safely predict is that disruptive change will happen at an ever-increasing rate in the future.

Q: What was the best advice anyone gave you?

It is hard to pick one thing here because I was fortunate to have many good mentors and teachers during my time. I guess it might be that you don’t have to be an acknowledged expert in a field in order to be able to make a useful or original contribution to it. Being new to a field means you have a lot to learn but it also means you have a lot to give. A new perspective on an issue is often what is needed for the next breakthrough.

Q: What is the next big breakthrough for photography?

There is so much going on in the photographic field right now so it is hard for me to say. I would tend to say that the taking (capturing) of personal images is pretty much part of everyday life but the focused retrieving of images is still a bit of challenge for the average person (but getting better). As augmented reality begins to take hold, the whole concept of imaging will move to one of complete stories being associated with these images instead of just the displaying of the images themselves. Attention will need to be paid to ensuring that image modification/fabrication will not unduly influence what we assume to be a representation of reality.

Q: If you could photograph one thing in your day, what would it be?

I really enjoy nature and wildlife photography these days. It is quite satisfying for me to spend a morning in the woods to capture quiet moments involving nature. It sort of slows me down to just focus on observing rather than trying to affect or change something. Many times I don’t “get the picture” but I do experience an event that I would have missed if I didn’t take the time to “wander aimlessly” with my camera. Those shots that I do manage to get are all the more special because I took the time to be “in the moment.” Photography is fun but it is also very therapeutic! 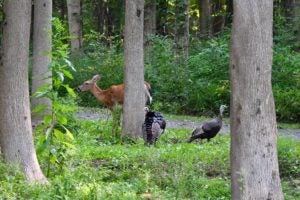 This image was taken by Steven Sasson outside his front door!