Even before he analyzed his data, biologist Brad Lister knew things had changed in the northeastern forests of Puerto Rico. When he had been there before, in 1976, the forest floor and canopy were rich with the millipedes, sowbugs, and insects he had come to study. Nearly four decades later, the air temperature in Luquillo’s rain forest was significantly warmer, and there were noticeably fewer invertebrates flying through the air and crawling on the trees. Many of the creatures he was there to see—invertebrates known collectively as arthropods—had seemingly vanished. And the frogs, birds, and lizards that eat arthropods also seemed to be much less abundant. 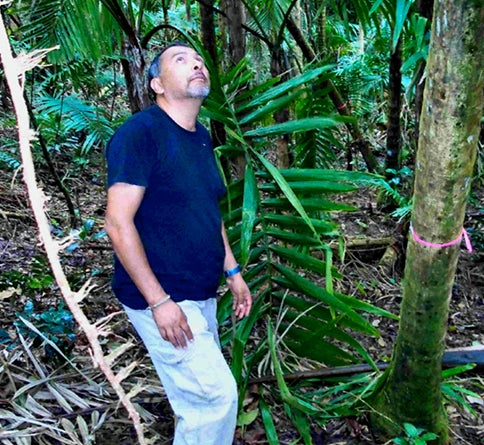 In research published in the Proceedings of the National Academy of Sciences, Lister and his co-author, Andres Garcia of the Universidad Nacional Autónoma de México, report that arthropod biomass has declined by as much as 60-fold. Over the same time period, the region’s average temperature has risen 2.0 degrees Celsius.

The finding supports the recent United Nations Intergovernmental Panel on Climate Change warnings of extreme environmental threats by 2040 if global temperatures rise by 2.0 degrees Celsius. Like some other tropical locations, the study area in the Luquillo rainforest has already reached or exceeded a 2.0 degree Celsius rise in average temperature, and the study finds that the consequences are, indeed, potentially catastrophic.

Lister and Garcia assessed arthropod abundance using the same techniques in the same area of the rainforest that Lister first visited in 1976. They swept ground-level vegetation with nets and used sticky “plates” to trap arthropods on the ground and in the canopy for later analysis. In the 1970s, sticky plates left for 12 hours in the canopy would be coated in invertebrate animals. Forty years later, the difference was obvious.

“We’d pull down the plates from the canopy, after they’d been up there for 12 hours in a tropical forest, and there’d be a couple of flies, maybe a cockroach or two,” said Lister, lead author of the study and a faculty member in the Rensselaer Department of Biological Sciences. “It was just a collapse in the insect community. A really dramatic change.”

The resulting publication, “Climate Driven Declines in Arthropod Abundance Restructure a Rainforest Food Web,” is based on data collected between 1976 and 2013 by the authors and the Luquillo Long Term Ecological Research program at three mid-elevation habitats in Puerto Rico’s protected Luquillo rainforest. These data included censuses of frogs, lizards, and birds, and as expected these insectivores were declining in parallel with their food supply. Following assessment of El Nino effects and application of new techniques to assess causality, the authors conclude that climate warming is the major driver of reductions in arthropod abundance in the Luquillo forest.

Their findings suggest that the negative effects of climate warming in tropical forests may be even greater than anticipated. “The insect populations in the Luquillo forest are crashing,” Lister said, “and once that begins, the animals that eat the insects have insufficient food, which results in decreased reproduction and survivorship and consequent declines in abundance.”

Cold-blooded invertebrates living in tropical climates are particularly vulnerable to climate warming since they are adapted to relatively stable year-round temperatures. The dramatic declines in their abundance in the Luquillo rainforest have precipitated a major bottom-up trophic cascade and ensuing collapse of the forest food web. Given that tropical forests harbor two thirds of the Earth’s species, these results have profound implications for the future stability and biodiversity of rainforest ecosystems, as well as conservation efforts aimed at mitigating the effects of climate warming.

“These are profound, deeply disturbing changes, and that’s why the United Nations report was so urgent and forceful,” said Lister. “What the United Nations predicts for 2040 is what we’re already seeing in Luquillo. It’s a harbinger of a global unravelling of natural systems that will cause unimaginable amounts of damage to humans and to the planet.”